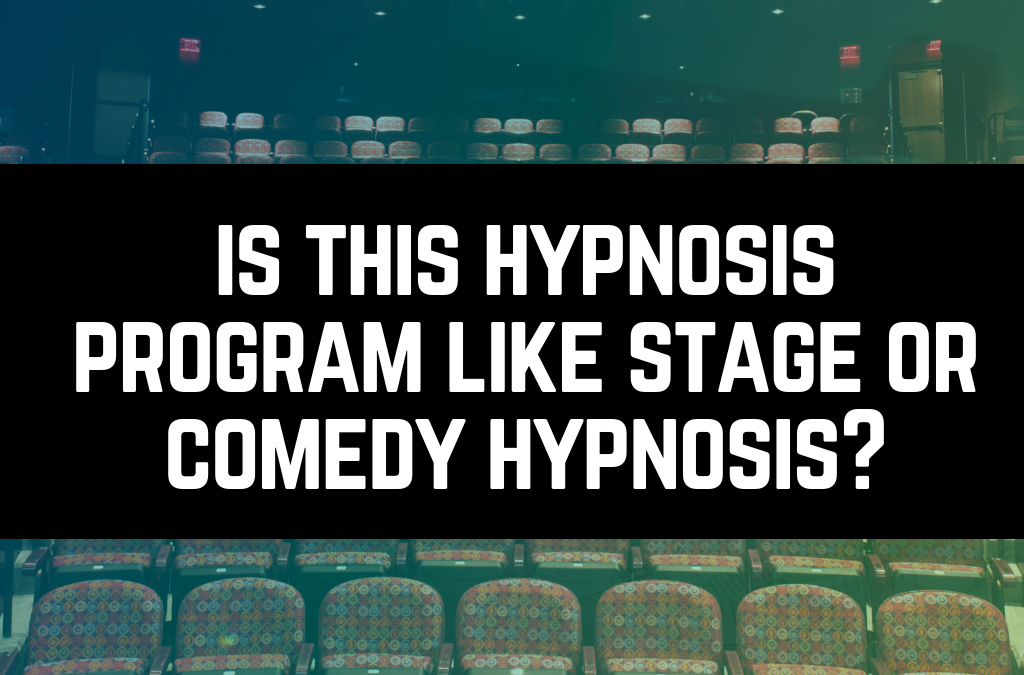 Is This Hypnosis Program Like Stage Hypnosis? NE Hypnosis says no! But, if you’ve ever been to Las Vegas or Atlantic City, you know that there is no shortage of famous hypnotists. Doing two shows a night at celebrated venues. In fact, you may even have paid good money to attend one or two of these shows.

Stage hypnosis is a form of entertainment where the celebrity hypnotist brings audience members up on stage. It hypnotizes them to do all manner of silly things from quacking like a duck on command, to believing that their sister is actually a ten-foot-tall giant bird.

Often the subjects eagerly jump at the chance to participate in front of their friends under the direction of the stage hypnotist. Now some of these hypnotists are actually quite skilled. They can induce a hypnotic state quickly and effectively with participants truly being in a trace. This makes for great entertainment and a fun show.

Is this hypnosis program real and is stage hypnosis as well? There are some audience members that participate and with some power of suggestion. They go along with the show because they think that is how the show is supposed to work.

They are not necessarily faking it because some actually believe they are hypnotized, but they are not all truly hypnotized, either. They are simply complying with or bending to friendly social pressure from their supporters in the audience.

Many of the people who volunteer are already predisposed to doing silly things, so getting them up on stage is not a difficult task. That said, as mentioned previously, there are some audience members who do indeed get hypnotized and can be a great source of entertainment.

Who Do Hypnotists Try To Target?

Stage hypnotists want volunteers who are eager to act in a ridiculous manner. To amuse the crowd and at times, the hypnotist may want some participants that are part of the show for the comedy effect. This is because stage hypnosis is all about the entertainment factor.

The type of hypnosis used in these shows on-stage is totally real and easily achieved. That doesn’t mean it bears any resemblance to a private or group hypnosis therapy session. Let’s make that clear. Stage hypnosis is a lot of fun and should be viewed as pure entertainment.

It is used to get a laugh, but at times it can undermine the credibility of clinical hypnotists. People actually believe all hypnosis is similar to stage hypnosis. That is that even in a clinical setting people frequently ask if they will go home and act out. In some silly way if they hear a certain trigger word the hypnotist used on stage.

What Is Clinical Hypnosis?

Clinical hypnosis works exactly the same way as stage hypnosis. These are where suggestions are entered at the same level of the subconscious mind. The big difference, is that clinical hypnosis therapy allows the patient to remember a suggestion. It gives them the opportunity to change the way they remember an experience, or change a behavior.

Stage or comedy hypnosis is short lived and quickly forgotten, with no lasting effects. This is good in that you can rest assured you won’t act out in any strange or silly way once the show is over.

It is important to know that with clinical hypnosis. You cannot be made to do anything you do not want to do, and you will remain in full control of yourself at all times.

A clinical hypnotherapist will only work within the sphere of your beliefs, values, and morals. They will never do anything to compromise you in any way. You hold the power to control your mind, not the hypnotist. It’s about willpower. We all have it, and it’s an important component to successful hypnosis.

The same is true if you want to stop eating junk foods. If you need motivation for something, or even if you want to give up chocolate. First, if you are only approaching the idea of hypnotherapy because you have been pushed into it by someone. Hypnosis won’t have the desired effect. You have to want it.

What Is Stage Hypnosis?

Stage hypnosis makes people feel relaxed and more confident in themselves. They take away the inhibitions that normally hold people back from reaching outside their usual comfort zone. Furthermore, audience volunteers who are chosen to participate, will gleefully do whatever they are asked to do.

It’s difficult to know if those individuals would perform these acts while in a normal alert waking state. Second they might be reserved or introverted, but inherently, almost everyone has undisclosed or purposely hidden secret wishes. Audience volunteers agree to participate fully knowing what is likely to happen.

Hypnosis helps to lower the conscious guard, thereby allowing those hidden desires to participate in the show to surface. Also it should be noted that these folks are not being made to do these things.

There is a morality to hypnosis. If individuals know the difference between right and wrong, then they will not cross those moral lines while hypnotized. So it is reassuring to know that no matter what a hypnotist suggest to you. You will never do anything against your morals or ethics while in a hypnotic state.

The power of suggestion is at the heart of hypnosis, whether on-stage or in a private setting. But there is a very big difference between the stage hypnotist and the clinical hypnotherapist, besides their job description.

What Is The Difference Between A Hypnotist And Hypo-therapist?

The stage hypnotist is a capable performer. They understand how to identify participants whom he or she think will be the most entertaining on-stage. Furthermore being most susceptible to the silly suggestions that will provide an entertaining show and amuse the audience.

The clinical hypnotherapist relies on their knowledge of the human subconscious. Does so using a kind and thoughtful method. Helping individuals to achieve the changes they want to make in their lives. There is no entertainment component here, and there is no audience. There is only calm, peaceful, supportive interaction.

At this point, you should be seeing the obvious pattern:

Seeking out hypnosis is not about changing the past, but rather about changing the future. It’s about restoring your relationship with your unconscious mind. Hypnosis can help fix the inside of your head. Things on the outside become easier, allowing you to set your own direction. Become the master of your own thoughts with hypnosis.

So you may still wonder, Is This Hypnosis Program Like Stage Hypnosis?

Our program is not at all like stage hypnosis. In addition even the most reserved person can be assured they won’t have to act. Even speak at all in front of anyone.

Our program is a small group hypnosis setting where clients simply sit back in a recliner chair. They “listen” to the hypnosis session. Some people hear every word and others feel like they ‘zone out’ or almost fall asleep.

Either way is fine because the subconscious mind picks up every word. The mind uses it to help change your thoughts about food. Your habits and actions around meals, snacks, grocery shopping and food choices. Just as important, it helps change any limiting beliefs you have about yourself.

You leave the program knowing you are strong enough to achieve any goal you have for yourself. You will not have the ability to follow through and make changes that last.

We schedule hypnosis for weight loss sessions in CT every month. Contact us if you’d like to learn more or if you have any questions regarding our weight loss hypnosis program.